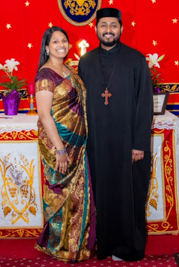 Fr. Abu Varghese Peter was born to Rev. Fr. T.G. Peter and Mrs. Betsy Peter on March 8, 1982, in Pathanamthitta, Kerala, India. His parents worked at the Mount Tabor St. Stephen’s Higher Secondary School in Pathanapuram, and due to this, his family moved to Pathanapuram, near Mount Tabor Dayara.

Currently, he’s serving as the Vicar and President of St. George Malankara Orthodox Church in Fairless Hills, PA, since November 2013. Fr. Peter is also working as a System Engineer for Bank of America.

He is married to Mrs. Anu Peter, and they reside in Bensalem, PA.